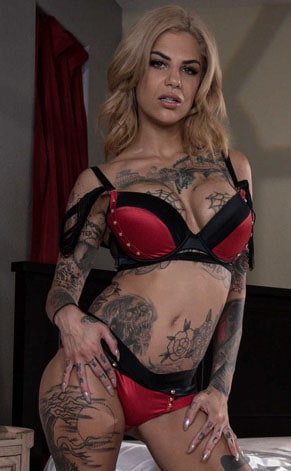 Bonnie Rotten, a bust-out performer from Cincinnati, Ohio, started her modeling career doing car and motorcycle shows in the Midwest involving nostalgia cars, hot rods and race cars while working as a spokesmodel/poster model for a custom car company. Bonnie went around the U.S. working auto/bike industry shows and promoting herself as a pin-up model and participating in many competitions in Chicago, Indianapolis, Kentucky and Michigan. Then she broke the mold as a tattooed model and moved on to the riskier side.

When Bonnie turned 18 she started dancing in Dayton, Ohio, and today she is an advanced pole dancer, having worked in over 20 clubs in the U.S. before ever doing adult movies.

She participated in a pageant in Indianapolis at a horror convention called Horrorhound weekend. It included a pageant called Ms. Dead Indiana, and she was competing for a spread in the adult-friendly horror magazine Girls and Corpses.

Bonnie traveled to Los Angeles to do the photo shoot for the magazine. While Bonnie was in town, she was introduced to the fetish world. An introduction to DungeonCorp studios at Ken Marcus’ birthday party led to Bonnie’s fascination with fetish. A few months later, Bonnie worked the Fetish and Fantasy Ball in Las Vegas. After that she was curious and ready to explore. Which led to Bonnie moving to L.A. and starting as an adult/fetish model.