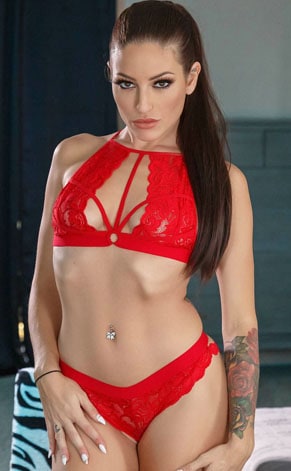 Kissa’s decision to join the adult industry wasn’t only influenced by meeting Johnny. An adrenaline junkie, Kissa is all about living in the moment and enjoying herself. Her mantra is “stop living life like you’ll live again,” and she brings the same moment-seeking vibe to her scenes. Whether she’s taking Johnny’s thick cock in her tight pussy or sucking on a starlet’s tits in a lesbian scene, Kissa always fucks like she’ll never have the chance to fuck again!

Off-camera, Kissa is always chasing the next rush. Her and Johnny are constantly staying active. The couple loves anything with the outdoors, like hiking, and camping, as well as exploring and traveling. Considering how senstive Kissa’s skin is – she’s had an orgasm just from touching a cold floor – it’s of little surprise that they are constantly finding new locations to fuck, and new fetishes to try. Why live the same boring life, when you can take yours by the balls? Follow Kissa’s lead, and take the first step by watching her scenes here at Netfapx!